Everything about flying dinosaurs or pterosaurs (winged reptiles) is terrific. Compared to other more well-known and studied dinosaur species, it has taken a little more time for scientists to agree on these creatures because archaeological finds have not been so abundant and enlightening. However, today enough information is available, and most specialists agree on the generic characteristics of the former kings of the heights, which were the only flying vertebrates on Earth long before the first birds existed that we know today.

Thus we know that flying dinosaurs had different shapes and sizes and in that sense, some were very small, like common sparrows, while others were so large that only one of its wings could span the size of a bus. Also, like modern birds, these dinosaurs flew, although some only planned, laid eggs and nested at heights, and had a highly developed view, with large eyes that allowed them to distinguish prey from above.

Their primary victims in the food chain were fish and insects, and thanks to their ease of flight they could escape from other hungry dinosaurs. Having said that in an introductory way, and if you are interested in knowing a little more about these dinosaurs, we suggest you take a look at the characteristics of some particular species, of the more than 100 discovered so far.

From fossil findings, it can be estimated that Pterodactylus was one of the first species of a pterodactyloid, subgroup of short-tailed or tailless pterosaurs. This species lived until the end of the Age of Dinosaurs, and 27 fossil specimens have been found, most of them complete. Thanks to this, it has been discerned that the skulls of the Pterodactylus were long and narrow, with about 90 large conical teeth in the front and smaller in the back, and extended backward from the tips of both jaws. Also, the species had a crest in the skull, composed mainly of soft tissues and supposedly developed when the animal reached maturity. Undoubtedly, the Pterodactylus were excellent flying and thanks to their pointed and sharp teeth; they must have been able to feed on flying insects, small land creatures, and fish with ease. Atlascopcosaurus is a genus that inhabited Australia in the mid-Cretaceous period, more than 110 million years ago. As a hipsilofodontid ornithopod dinosaur, this specimen was found in 1984 in the sediments of the Eumeralla Formation, on the Victoria coast. Little is known also known as Atlas Copco reptile because only one upper jaw and a partial jaw with teeth could be found. From this and other species related to the genus, it has been possible to infer some of its characteristics. The description of this animal was made by Tom Rich and Patricia Vickers-Rich between 1988 and 1989, who gave him his name envelope to honor the Atlas Copco Company that provided the excavation equipment. In 1988 the Atlascopcosaurus was assigned to the Hypsilophodontidae; while today they are considered as a basal member of the Euornithopoda.

The Scaphognathus was another species of flying pterosaur that inhabited the Earth during the Jurassic period, about 150 million years ago. Based on the fossil findings, it is estimated that it flew in regions of what is now the European continent. Its wingspan in length between the wings was almost one meter (0.91 m), and its head was short, with a very rounded blunt snout, reason why the species is also referred to as “bathtub mouth.” The Scaphognathus had standard features with the Rhamphorhynchus and a relatively large brain if its body size is taken into account. He also had 28 pieces in his denture: 18 long and pointed in the upper jaw and 10 in the lower jaw.

The Pteranodon was one of a giant pterosaurs. His specimens had a small body but specially designed to fly correctly, to which also contributed their weak and tiny legs and their almost no tail, which was very small, next to its massive wings. These own characteristics at the same time must have conditioned the estimated difficulties of the species to move on land. According to specialists, the Pteranodon could have flown at speeds close to 48 kilometers per hour and its wings were three times longer than those of the most significant contemporary bird, the albatross. For all this, it is estimated that he was the true master of the heavens in the period he lived and despite not having teeth, his large size (some up to 7 meters) and his ability to fly made him a fearsome predator, although He fed mostly on fish. 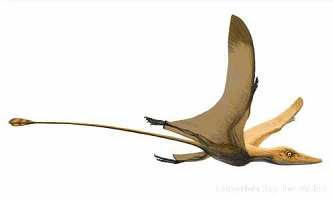 The Preondactylus was one of the first and smallest pterosaurs, perhaps even smaller than a modern pigeon. His teeth were small and pointed, indicating that perhaps he fed mostly on small fish that he caught out of water and insects. Their wings were very different from those of contemporary birds or bats and measured only 18 centimeters from side to side. Similar to many other flying dinosaurs, the skeletal bones of this species were hollow and filled with air spaces, which made them light and enabled them to fly effectively.