What Do Birds Eat?

Birds are, with a few exceptions, feathered animals with two legs that are able to fly. When you go outside, odds are you’ll see at least one bird in the branches of a tree, perched on a power line or flying overhead. Their ability to take to the air to hunt or escape predators has made them wildly successful, and there are over 10,000 known species of birds ranging in size from a hummingbird little bigger than a bee to the 9 foot tall ostrich.

As you can imagine, any class of animals this diverse will also have wildly varied diets. One thing they all have in common is a high metabolism, and so they must be constantly on the lookout for food. If you want to know what pet, wild and baby birds need to survive, this website is here to help.

What do Pet Birds Eat?

Many people like to keep birds as pets, since they are colorful and intelligent creatures. The most common types of pet birds belong to the parrot family, including the Budgerigar, cockatoo, macaw and African Grey. Some of these birds are as intelligent as a small child, and can even learn to talk! What do birds eat? Most parrot species will need specialized diets for their particular nutritional needs, but all eat a variety of seeds and fruits to stay healthy. You can feed your parrot slices of low-sugar fruits and vegetables as a treat. Parrots need to stay stimulated and engaged with their environment, so try to find challenging ways to deliver their food. Some owners like to stuff a pine cone and hang it from the cage for the parrot to work at, while others have their parrot repeat a noise or other trick to earn a snack.

What do Wild Birds Eat?

In the wild, a bird’s diet usually depends on its size. The smallest birds, hummingbirds, live off the nectar of flowers. Slightly larger birds like sparrows and finches eat seeds such as thistle, sunflower and safflower seeds; worms and other small invertebrates; and insects like crickets or mosquitoes. Other birds prefer to live by the water and dive for fish or shellfish. Falcons and eagles swoop down from the skies to catch small prey like rabbits or even other birds.

On the other hand, flocks of geese nibble on grass like sheep. Some birds make a living stealing from others rather than finding their own food. Many gulls will wait until another bird has found something tasty and will then take the prize for themselves. Vultures wait for an animal to die and then eat its corpse. That may sound gross, but vultures are actually essential for cleaning up the wilderness and preventing the spread of disease. There are so many types of birds out there, each having adapted to the power of flight a little bit differently, that the sheer variety of what birds eat can be breathtaking.

What do baby birds eat?

Baby birds are, with a few exceptions, reliant on their mothers for days, months or even years to get food. Mother birds leave their nest for about fifteen minutes at a time to find their standard food like worms, bugs, seeds and fruits. The mother then eats what she finds and flies it back to her nest, where she regurgitates the contents of her stomach into the waiting mouths of her chicks. If you have found a baby bird on the ground, it’s best to return it to its nest, as it needs its mother to survive. If the baby has adult feathers, it was probably in the middle of learning how to fly! For more information of the topic of what do birds eat, then please visit the what do birds eat website.

Not all birds are helpless as babies, however. Ground-dwelling birds like chickens, pheasants, guinea fowl and turkeys are able to walk and search for food with their mothers shortly after hatching. They start by eating tiny seeds and insects that their mothers show to them before growing into a regular diet.

What do Robins Eat?

Robins returning to lawns and backyards are considered by many to be the first sign of spring. They’re easily recognized by the bright red feathers on their chest. Robins are expert foragers and primarily live off of insects, fruits and berries. The robin’s favorite food of all is the worm, which it scours the ground for and will pounce upon on sight.

Other prey includes grubs and maggots from beetles and flies, caterpillars, crickets, grasshoppers, butterflies and spiders. Bugs are their preferred foods, but they also spend plenty of time eating berries and fruits like bittersweet berries, pears, huckleberries, raspberries, apples, blackberries, rose hips, choke weed berries, cherries and blueberries. When they live near the ocean, robins have also been known to eat dead clams and oysters, sand fleas and other small mollusks. They do not eat seeds, which is why you never see robins at bird feeders.

What do turkeys eat?

The turkey is a large bird that can be either domesticated or wild. Wild turkeys eat by foraging on the ground and in low shrubs and trees. Their preferred foods are the nuts and mast of deciduous trees, such as acorns, hickory nuts, chestnuts and hazelnuts. They also eat berries like huckleberries, blackberries, juniper berries, blueberries and bearberries, along with seeds and grasses. Wild turkeys are omnivorous, meaning they will also consume insects, worms, mice, small lizards and snakes if they can find and catch them. In farm country, flocks of turkeys can often be found picking over fields after a harvest, collecting all of the dropped seeds.

Domesticated turkeys are raised for their meat, and so need to be more than double the weight of most wild turkeys when they are slaughtered. To accomplish this, they are fed a fattening mix of corn, soybeans and various vitamin mixes. Turkeys on smaller farms are usually allowed to free range and forage like their wild cousins, but also eat a special turkey diet in pellet or crumble form.

What do crows eat?

Crows are some of the smartest animals in the world, comprised of several species of bird from the jackdaw to the raven. Like most birds, crows are omnivorous, and their extreme intelligence gives them access to many different types of food. Their main sources of food are insects like flies and beetles. They hunt for bugs by sifting through leaves, sticks and dirt on the ground, where they may also pick up seeds from various plants and other bugs like spiders, worms and even scorpions! Sometimes they find larger meals, like frogs, mice and carrion.

Crows are one of the only animals that are able to create tools to reach their food. Crows have been observed turning a strand of wire into a hook in order to pull a meal from a bottle, or using bread crumbs to lure fish within striking distance.

What do sparrows eat?

For the most part sparrows are seed eaters. The seeds that the sparrow will normally prefer are millet, grass, thistle, weed, and sunflower seed. Even though the sparrow is primarily a seed eater they will eat small insects, and are often seen in parking lots and parks where scraps of food are left about. During the breading season the common House Sparrow will prefer insects and worms. During this time a mealworm feeder will attract sparrows to your backyard.

What do Eagles Eat?

Eagles are birds of prey, meaning their diet consists of meat that they either catch or find as carrion. Most eat a varied diet of fish, rodents and other prey, but the particular types of food depends on the species of eagle. For example, bald eagles eat mainly trout, salmon, rabbits, ducks, raccoons, gulls and geese, but also feed on the corpses of animals such as deer, crabs, cows and even whales! The Steller’s sea eagle, which is the largest of the eagles, eats a similar diet of seafood as the bald eagle, also including cod, squid and mussels. The sea eagle lives off of coasts and will also catch baby seals, cranes and herons. Golden Eagles hunt on the land and eat rabbits, prairie dogs, marmots and foxes. They are even big and powerful enough catch baby deer, cows, goats and sheep.

What do bald eagles eat?

Bald Eagles are large birds of prey that usually rely on scavenging and fishing to survive. They are powerful predators with keen eyesight, which lets them see their quarry from over a mile away. Their most common prey are fish like salmon, trout, char, herrings and lances. 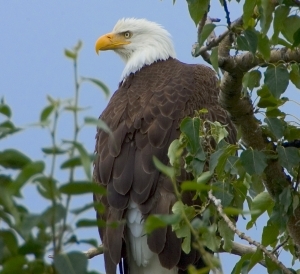 These make up anywhere from 60 to 90 percent of Bald Eagles’ diets. They also catch and eat land mammals such as rabbits, raccoons and beavers, and waterfowl like ducks, geese, grebes and egrets. A Bald Eagle soars high above its victims before diving down and snatching them back up into the air.

Bald Eagles prefer fresh food, but will also eat carrion or steal from other predators. A dead deer or seal is a feast for Bald Eagles, but dead fish along the shore are also choice pickings. Some Bald Eagles even steal fish from another large fishing bird, the Osprey, in midair!

What do peacocks eat?

Peacocks are large birds best known for the males’ huge and colorful tails. Peacocks can be kept as pets, but are usually seen in the wild, where they hunt for food in packs of up to 90 birds. They are omnivorous, but they mostly eat plant matter like new shoots and leaves, seeds and flowers. Grains like oats and wheat along with plant seeds are other favorites. They also catch insects like beetles, snails, frogs, mice and sometimes snakes! Peacocks have been known to gang up on a deadly cobra and kill it through sheer numbers.

Domestic peacocks are kept for their radiant plumage, which can add some interest to a property or supply craft stores. Many peacocks are allowed to forage freely, but they are also fed the same commercial food other game birds like pheasants eat. Peacocks like grain and bread as treats.

What do hummingbirds eat?

Hummingbirds are tiny birds that flutter from flower to flower drinking nectar. They are specially adapted to know which flowers have more sugar in their nectar than others, and several species of flowers have also evolved specifically to attract hummingbirds. Hummingbirds have to spend most of their time looking for food because they use up so much energy hovering around. Their long, thin bills help them to reach into blossoms and lap up the nectar with their tongues. Some of their favorite flowers are Columbine, Sage, Honeysuckle, Trumpet Creepers, Butterfly Bushes, Azaleas, Foxgloves and Petunias. However, hummingbirds cannot get all of the nutrients they need from flowers alone. They also eat bugs like spiders and small beetles that live on the plants.

If you want to see more hummingbirds, try planting their favorite flowers, bushes and trees around your home. You’ll be sure to draw in some grateful visitors!